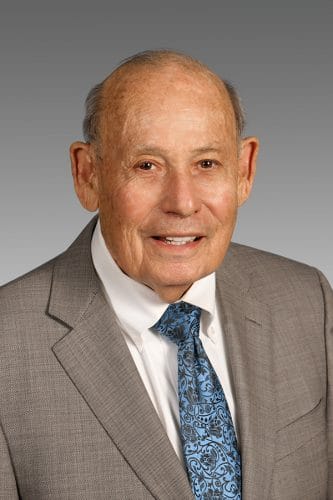 Shortly after, he opened his own practice – Kaplan, McMillan and Harris – in downtown Wichita and quickly gained a reputation as an attorney who fought hard for his clients and what was just. His generosity, dedication, honest approach and drive to help people who he thought got a bad deal, earned him respect among his colleagues and clients. Now, 60 years later, it’s not uncommon for Bob to represent the children and grandchildren of many of his first clients.

For many years, Bob’s had a general law practice, but his knack for real estate matters became his passion. In the late 90’s he decided to hone his passion and become the go-to attorney for commercial and residential property owners. Regardless of the case, or the method he uses to resolve disputes, Bob provides diligent, skillful, personalized representation. His niche has made him one of the most sought-after eminent domain and land use attorneys in Wichita. In 2010, when the downtown YMCA purchased his firm’s property, his original partner, Calvin McMillan, retired and Bob chose to join Klenda Austerman Law Firm.

Bob’s wife, Carolyn, got her first job as a legal secretary at Bob’s office in 1960. Four children and 14 grandchildren later, Carolyn doesn’t anticipate Bob slowing down anytime soon. “If you’ve ever met someone dedicated to something like Bob Kaplan is dedicated to the practice of law, you know they don’t have a lot of time for anything else,” says Carolyn. She says while he enjoys spending time in the mountains with his family, he always returns home ready to go back to work the very next day. “Retirement isn’t a word in Bob’s vocabulary.”

We hope to have Bob around the Epic Center offices for years to come! Congratulations on being a member of the Kansas Bar Association for 60 years! Here’s to many more.